We are honored to have some of our members share their stories.

Sergeant Brad Cornelius' (Ret.) family was shattered by a tragic accident when the car his daughter Emily was driving was crushed by another car whose driver was texting.

“I’ve never asked for a handout in my life. But there are times when you are pushed beyond your means. The Foundation was there when my family needed support. They helped us buy a scooter for Emily. It gave her measure of independence that is priceless. ” 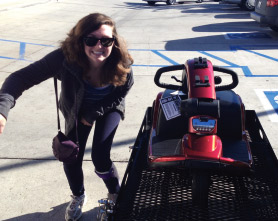 Emily shows off her scooter.

Brad Cornelius was the youngest recruit ever hired by the Beverly Hills Police in 1980. He worked his way up, through Patrol to Motor Sergeant, supervising traffic enforcement, DUI teams, Red Light Photo Enforcement and Major Collision Response Teams (MCRT). At the same time Brad was raising his family of six, who now range in age from 19 to 29. “I’d worked for five Chiefs, was raising my family and knew I was lucky to be a part of this great department.”

“The Major Collision Response Team investigates the bad accidents, he explained. “We reconstruct the collision to understand what happened. And because of that, unfortunately I’ve been on the scene of more deaths than most of the homicide detectives.” Taking a breath, Brad added, “Then one night five years ago, I got the call I usually have to make.”

“Hurry Dad, Emily’s been in an accident. It’s bad. Up in Santa Clarita.”

Emily, 16, a national volley ball champion, hardworking student and beloved daughter had been run off the road by another driver who was texting while driving. His car crossed the lane and pushed Emily’s into a tree. It impacted at 50-miles an hour. “I’ve investigated hundreds of accidents. This was the worst vehicle intrusion I’ve ever seen,” Brad recounted, his voice moving between the professional that he is and loving father remembering the worst night of his life. “The vehicle looked chopped in half, but it wasn’t. The car had actually been crushed and compacted into the cabin, smashing Emily from head to toe.”

The accident severed her fight foot at the ankle, bisected her carotid artery, crushed multiple bones and caused a traumatic head injury. She was bleeding out, nearly dying and had a stroke.

“The doctors saved her, even reattached her foot. In five years we’ve been in five hospitals. Emily’s a fighter. There’ve been so many operations. She is paralyzed on her left side, but has learned to stand and even walk a little. It’s a struggle, but she’s never given up,” Brad then adds, “And neither have we.”

“It’s important for Emily to be able to participate, be a part of our family, going to events, outings, dinner. But getting around is hard.” Stuck in her wheel chair, she’s totally dependent on others. It had become increasingly hard for this close knit family. Emily needed a power scooter that she could control – that would give her a measure of freedom and dignity and give the Cornelius family back some of their balance.

The hospitalizations, physical therapy, treatments, bandages, appliances and more had taken a financial toll on this family of seven. Brad turned to the Beverly Hills Police Foundation when his insurance wouldn’t.

The Foundation got Emily her scooter. “I have never asked for a handout,” Brad continued, “But there are times when you get pushed beyond your means.” “I’ve tried to give back with my time,” he explained gratefully, “working with the Foundation, talking on their behalf, but I’ll never be able to repay or adequately express my thanks.” Emily is 19 now. She and her dad have teamed up to deliver the warning about distracted driving and its consequences. Together, they created a video and made hundreds of presentations around the state. Like the Beverly Hills Police Foundation, Emily and Brad are making a difference.