We are honored to have some of our members share their stories.

Officer Gary Livitski (Ret.) faced the fight of his life when he was diagnosed with stage-4 non-Hodgkin lymphoma - physically, emotionally and financially.

“Three years of treatments alone wiped out my savings. We had nothing to fall back on and were about to lose our home. The Foundation saved my family. . . I owe everything to them.” 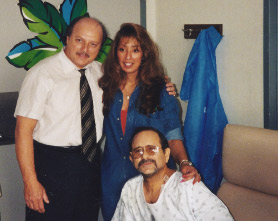 Actor Dennis Franz visited Gary and his wife Dee in the hospital.

In 1993, 15-year Police family member Gary Liviski was diagnosed with stage 4 Non-Hodgkin Lymphoma. Gary was told to immediately start treatment or probably die within the year.

“I had good insurance, vacation and sick days, so I was ready to start the fight,” Gary remembers. It was a tough course of treatment, but whenever he recovered enough, he was back at the department, serving the community as a Detective. But by 1996, after countless rounds of chemo lost their effectiveness, the doctors told Gary he would need a stem cell transplant. He took on that challenge too.

It wasn’t effective. In 1999 Gary was down to one option: a bone marrow transplant. Ultimately three transplants were required before the cells finally took hold. Before each surgery, Gary’s immune system had to be destroyed, leaving him weak and vulnerable to infection. There were complications, setbacks and debilitating episodes. Gary’s wife, Dee stopped working to take care of him. The road to recovery took three years. It also took almost everything they had. The couple’s only source of income, Gary’s disability, ended after two years. “I thought I had good insurance, but still, the expenses were about to wipe us out. The transplants, post-operative care, medications, everything . . . Even at 90% coverage, do the math; I still owed more than $100,000. After six years of this, my savings were gone, we were about to lose the house. Everything we’d worked for. We were close to living in the car.”

And then the Beverly Hills Police Foundation stepped up. “The Foundation saved my family,” Gary remembers, his voice filling with an emotion that never fades. “They wrote the check that saved us. It was overwhelming. I owe everything to them.” Gary reported back to work in December 2001. “What that Foundation did for my family, I could never repay. I started to donate to the Foundation after I got back to work. But you know I can never pay it back, because what they gave me was more than just money. They gave me hope.” Gary pauses to get his next thought right, “We are so thankful the Foundation was there. I just want to make sure it is there for the next Police family member who might need it. God bless the Foundation.”

Gary Livitski retired after 28 years from the Beverly Hills Police Department in 2006. He just celebrated his 20th year as a cancer survivor and still lives in the same house.